I was woken up by Georgie at 5.55am (digital clock) to glorious sunshine and it felt almost like summer.

I took Buddy for a lovely walk at the Yacht Club this morning. There was a man sitting by the slip way having breakfast rolls and coke reading his Newspaper in the early morning sunshine. 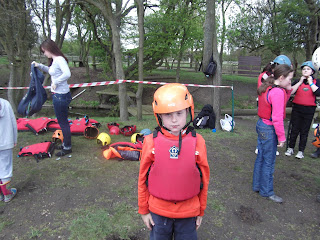 I made some rolls and sandwiches for a picnic before we all went off to Landbourne End Activity Centre open day. Luc went caving, kayaking and climbed on the low ropes across a pond. Luc was very wobbly on the low ropes and I managed to capture some excellent video footage parts 1  and part 2. Luc attracted quite a crowd of expectant parents as he tottered inches above the water. He made it across the pond 3 times by the hanging ropes, on a single plank and on a wire with single rope before succumbing to the hanging tyres.

Luc found he was quite good at kayaking and won the kayak race and really enjoyed it. We all did some pond dipping, visited the farm where we could stroke goslings, hens, piglets, lambs and kids (baby goats), went on a garden trail and rode in a cart pulled a pony. On the garden trail, we potted some pumpkin seeds and it will be interesting to see how they do. We all had a lovely time and we were exhausted by the time we got home at about 3.30pm.

I went to Jean & Jack's with the trailer to pick up a bench seat to house the pool pump and heater and also some plant pots. As I left their house, it poured down with enormous hail stones and wild gusts of wind. I had to stop twice as the bench turned over in spite of being tightly wedged between very heavy pots.

In 2012, football matches take place all over the weekend from Friday night to Monday night with most matches still taking place at 3pm on Saturday. A second set of league matches, domestic cup games and European games (Europa and Champions League) take place in the evenings from Tuesday to Thursday. Shortly after the BBC started screening live games on Friday nights in 1983, I predicted 7 day a week live football getting TV audiences from across the globe with hardly any one actually attending live games as they could view their team on TV. It's not there yet and the capacity of Premier League stadiums are still increasing, but it still might.
Posted by cliveyrussell at 10:22