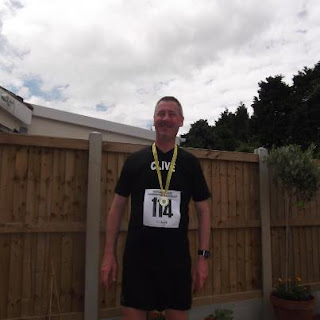 On Saturday, Luc and I went to Danbury Outdoor Centre. Whilst Luc did "Problem Solving" which he described as like being on a game show and the Obstacle Course, I ran from Paper Mill Lock to the Outdoor Centre and back. At least that was the plan. In the event, I ran up the hill to the Outdoor Centre in 37 minutes 16 seconds and was feeling a bit sluggish on the return for about 15 minutes when I had an overwhelming need to stop running - so I did. I walked back to the car which was parked at the bridge at Paper Mill Lock. The whole trip took me 1 hour 30 minutes and 50 seconds. I saw Tony, my boss at Ruggles & Jeffery who was there to pick up his children.

Julie took Georgina off to a party at the Paddocks when we got back whilst Luc did Lego.It appeared that the Entertainer at the party upset most of the children and got the hump with one child in particular. Julie reckoned that he made at least half the children cry so better than most.

In the Euros, Poland and Russia failed to qualify whilst  surprisingly Greece and Czech Republic got through. I had a low fat sausage casserolle based on a hairy bikers recipe for dinner.

On Sunday morning I went to the recycling centre (tip) to dispose of the old kitchen units and lots of off-cuts from the new one. It took me ages to unload but once again the trailer has proved invaluable.

The Castle Point Show had been postponed because of the weather so we went to the Weald Country Park show near Brentwood. It was excellent with a reenactment of the War of the Roses, dog exhibition, bouncy castles, kite making, lots of vintage cars, deers to feed and water zorbing.  The park itself is really nice and Buddy enjoyed socialising with lots of other dogs including 4 King Charles Cavaliers. Georgie was not too keen on the water zorbing but Luc was excellent at it.

Posted by cliveyrussell at 13:00 No comments:

I went running before work this week on Thursday and again this morning. Earlier in the week, on Monday, I was signed-off by the Dietitian as I've lost a lot of weight, but was reminded that I need to do 30 minutes exercise every day. I did my best ever time of 13 minutes seconds for the run to the Lobster Smack and back on Thursday and a more sedate 14 minutes seconds today. After each run, my "cool down" was a walk round the block with Georgie and Buddy.

The results from last Sunday's family attempt at Orienteering  at Langdon Hills have been published on the HAVOC website and we came 45th out of 48. It was quite a serious event but somehow we contrived not to come last!

I watched England play against Sweden in the second group game of the Euros this evening. Roy Hodgson (England Manager) had decided to play 2 central forwards (Andy Carroll and Danny Welbeck) when most teams are playing 4-5-1.  And the genius that is Roy Hodgson ensured a 3-2 win with both Welbeck and Carroll scoring and an inspired substitution bringing on Theo Walcott to score the equaliser at 2-2 and set up the winner. Good match.
Posted by cliveyrussell at 05:43 No comments:

On Saturday morning, I took Luc to Danbury Outdoor Centre where Luc did Archery and Climbing. Tony's (my boss at Ruggles & Jeffery) children were there along with a couple of their friends. Luc had a good time. Meanwhile I took the kayak out on a wobbly trip from Paper Mill Lock to Rushes Lock and back on the Chelmer & Blackwater Navigation. I underestimated the flow of the water and really struggled to get back to Paper Mill Lock in time to pick up Luc. Fortunately, I didn't fall in and I was getting better by the time I arrived back.

In the afternoon, I took Luc and Georgie to Chelmsford Museum to see iguanas, spiders, owls, lizards and snakes. We also did the museum trail. We were allowed to stroke and touch all the animals. Luc and I got to have a snake (Royal Python) around our necks.

I watched the European Championship football on the television. Mark Lawrenson, the former Irish international and Liverpool defender, turned TV pundit was dreadful in the role of colour commentator, as usual.

Saturday was my late mother's birthday. We all really miss her and wish that she was still with us.

On Sunday  morning I made rolls and sandwiches and we all (including Buddy) went to Langdon Hills to go orienteering. We were not that good, particularly as lots of the other competitors were running round and we were walking at Georgie's pace. We eventually finished on a score of -20 as we took more than the permitted hour and only found 7 markers but everyone enjoyed the walk and the picnic afterwards.

I watched Spain draw 1-1 with Italy and Croatia beat Ireland 3-1. I get cross when people toadie around the Irish and act like they are British.

Posted by cliveyrussell at 23:36 No comments: 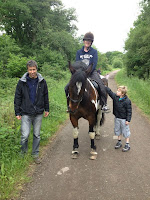 We had a lovely day yesterday (Tuesday) with Sue and Ned. We dropped off Buddy at Jack and Jean’s house and then drove round the M25 to Cobham. We met Sue and Ned at Old Lodge Stud and then Julie, Luc and Georgina rode Sue’s horse Pebble on Bookham Common. Both the children were very confident with Pebble as she is very good natured and gentle in spite of her size. Pebble was particularly good with the children when they gave her carrots. Luc also fed Sue’s hens that are kept at the stables by hand.

We had lunch in the cars in a pretty car park in Weybridge next to Weybridge Sailing Club as the rain started to fall. It didn’t matter as we all got very wet when we went in the kayak. Luc, Ned and I all had a turn at kayaking whilst Georgie had a paddle in the Thames!

The weather was pretty awful on Monday, but Luc, Georgie and I went crabbing at Benfleet Yacht Club as I misjudged the tide to do it at Concord Beach. We only caught 1 crab which Georgie landed. There was a bit of excitement at the club as a yacht was hauled up the slip way for repairs having been hit by a fishing boat that had escaped its moorings.

In between the showers on Sunday, Luc, Georgie and I went to what was left of the “Big Jubilee Picnic” on the green at Labworth. It was meant to be a green full of picnicers but there was nobody eating as the grass was too wet! The children did get to sit in a fire engine and an old Southend district bus and we watched some tug-of-war. We called in to see Jack and Jean and watched some of the Jubilee flotilla on the Thames - it was very spectacular.

Visit Clive Russell's website
Posted by cliveyrussell at 02:40 No comments:

A busy day ahead.

Georgie woke me up early and I made the sandwiches for Luc's and my lunch. I had a really good run and managed the run to Paper Mill Lock in 1 hour 14 minutes without stopping. 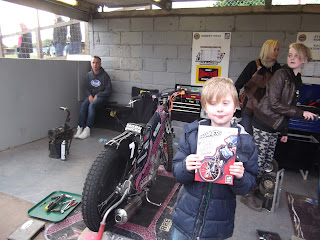 After a trip to Wicks, I watched the football but left just after half time to watch Speedway for the first time. We went to the Arena Essex Raceway to watch the Lakeside Hammers. Lots of people from my firm, Ruggles & Jeffery were there.


The Hammers lost badly but it was excellent entertainment and Luc thoroughly enjoyed himself.


I've decided to limit my "daily" blogs to just significant days in my life and that of the world.
Posted by cliveyrussell at 07:47 No comments: